Family Owned and Operated Since 1910. Stop in and visit with our home design experts and see for yourself what sets us apart from the rest! With a firm belief a business is no better than the people who comprise it, we go to great lengths to find the support our customers need. That’s why everyone from our design staff to our installation specialists go the extra mile to bring your vision to life, just as you imagined. 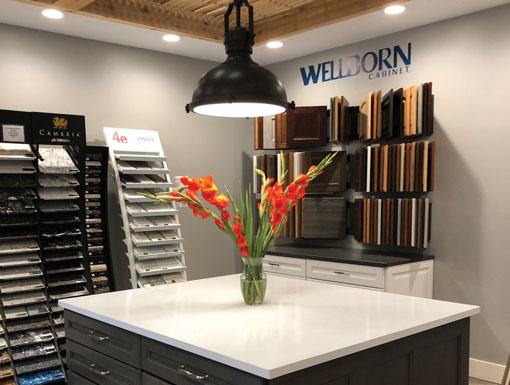 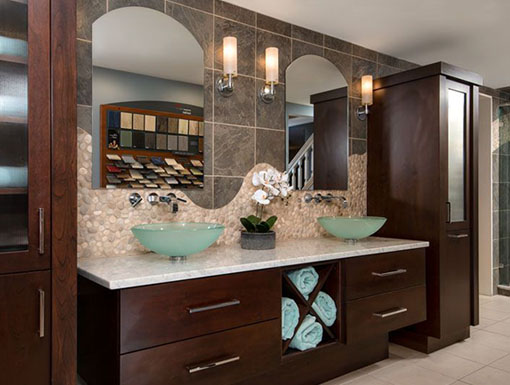 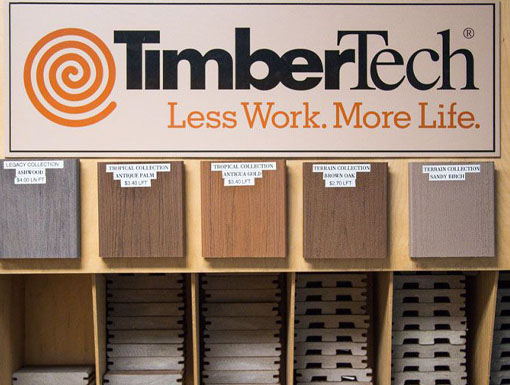 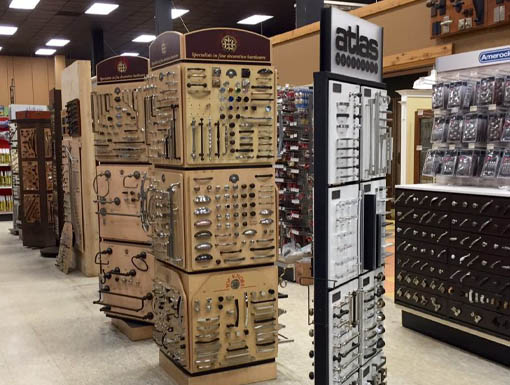 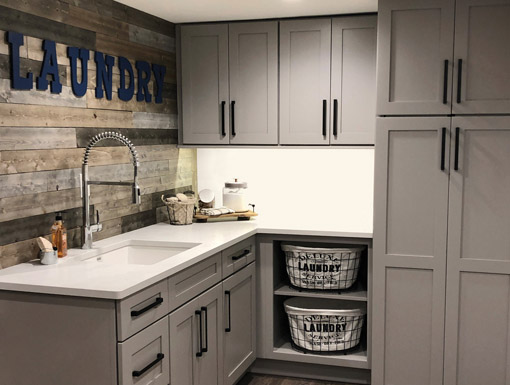 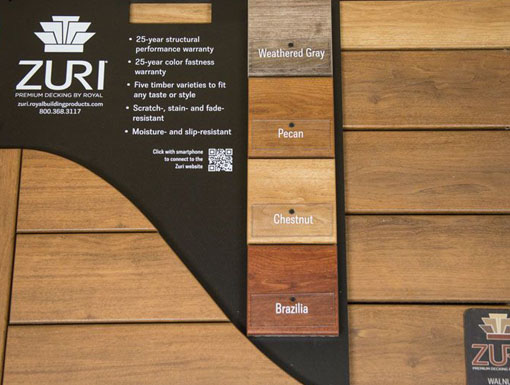 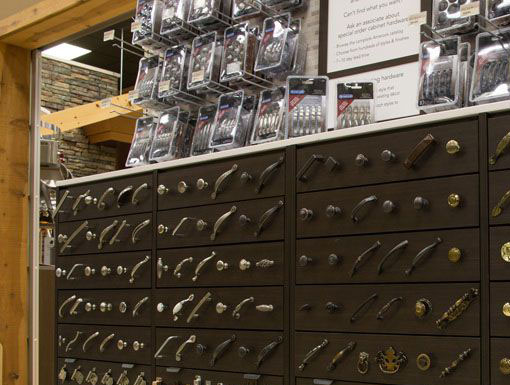 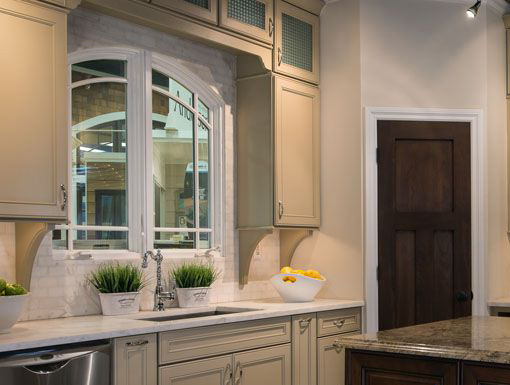 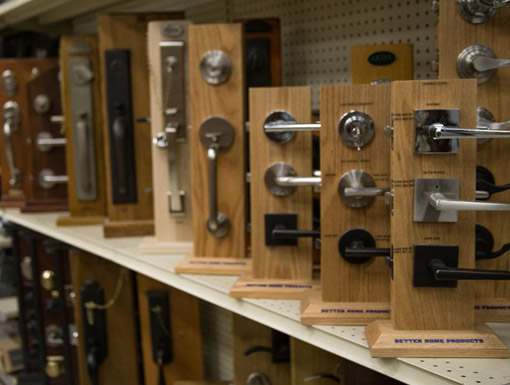 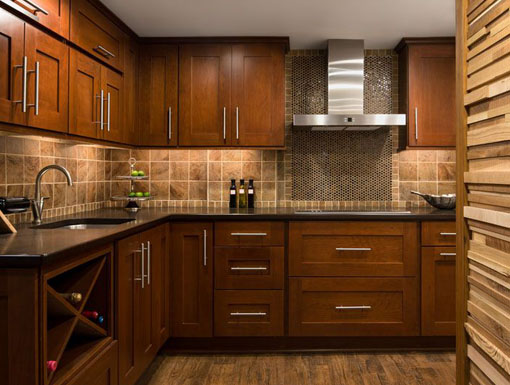 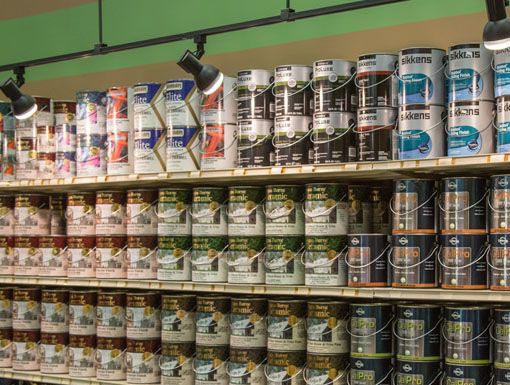 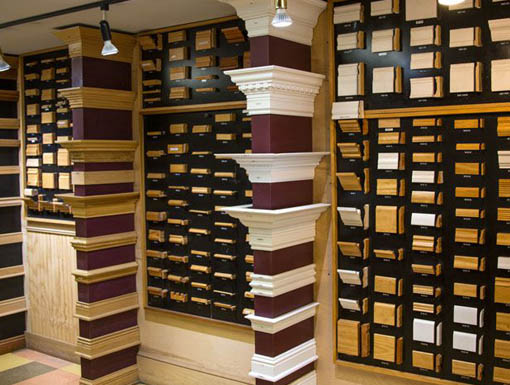 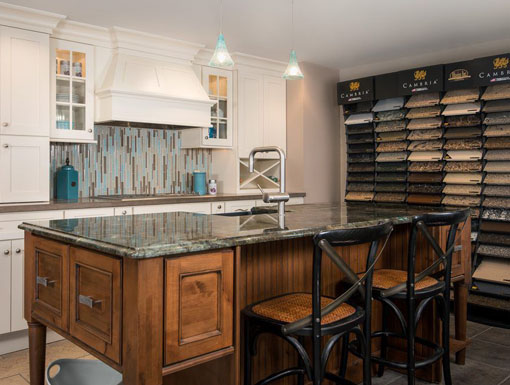 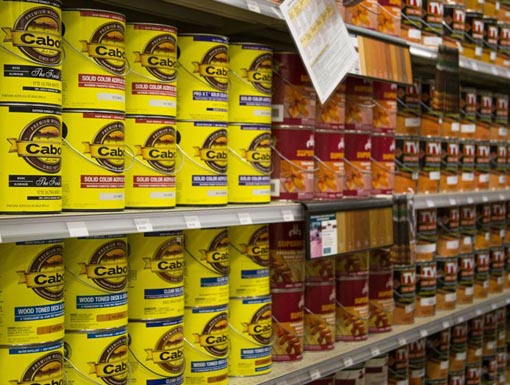 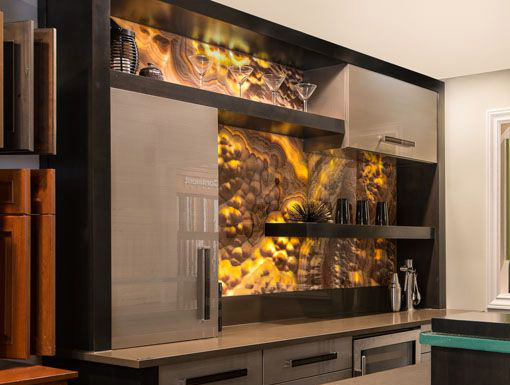 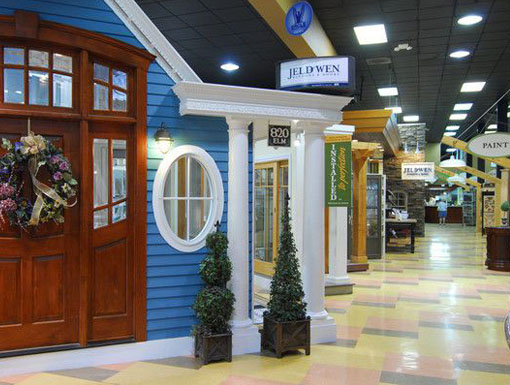 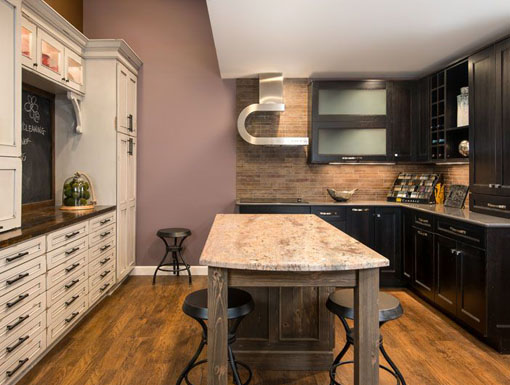 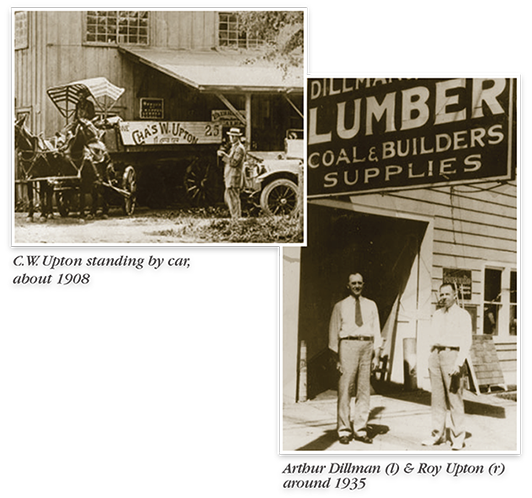 In 1910 if you wanted to call Dillman & Upton, you would turn the crank on your telephone, get the operator’s attention and then give her the number 25. The phone would be answered, “C.W. Upton Wood & Coal Company.” Today after 100 years of continuous operation and three different Rochester locations, instead of asking for “25,” you can call the store direct, contact the owners and staff on their cell phones, or visit on-line at dillmanupton.com. Times sure have changed, but Dillman & Upton continues to be one of the last local businesses that started at the beginning of the century.

It all began in the 1890’s when Charles W. Upton left his farm in Utica, Michigan, and migrated to Rochester. His Utica home is now The Upton House in the Sterling Heights City Complex at the crossroads of Utica & Dodge Park. C.W. Upton started the company about 1908, locating it on West 5th St. (University) where Jerry’s Gun Shop stands today. Known primarily as a coal dealer in the early days, C.W. created his own reputation. The plaid canopies adorning his coal delivery wagons, and later the early automobiles, seemed to fit his colorful personality.

A report in The Pontiac Press Gazette on Tuesday, July 28, 1914, gives the following account: “ROCHESTER MAN IS ARRESTED – As the result of a discussion in the office of the Rochester Era, said to have arisen over the publication of a report in regard to a school board election, Editor W.A. Fox is at home suffering from injuries and Charles W. Upton, a coal dealer, is under arrest charged with assault and battery. Editor Fox alleges Upton attacked him in the Era office Saturday and that he sustained injuries which have prevented him from resuming his work.” (Rumor has it that C.W. bit off the end of Fox’s finger during the argument.)

In its original 1897 edition, Beautiful Rochester, A Sketch of a Lively Town, noted C.W. Upton’s “first-class reputation as an auctioneer…with services in constant demand during the season.” In the same publication, C.W. is described as “a wide-awake, all-around hustler.”

An agreement was negotiated to purchase property at 543 Main Street from Daniel L. Kessler. After Roy returned from World War I in 1919, the company moved to its new home on Main Street. Roy Upton and Arthur Dillman bought C.W. Upton’s interest in the company for one dollar and other considerations.

In partnership, Roy Upton concentrated on meeting the daily needs of the customer and adding new building products as the industry changed. Art Dillman was the “finance man.” One of his joys was the daily deposit at the National Bank of Rochester. If the transaction was a healthy one, Art walked to the bank himself. If business was not so brisk that day, he would send one of the “office girls” to make the deposit. Art died many years later in the late 1970’s from a heart attack he suffered at the corner of Main & University after a “good business day.” During the early 1940’s most building stopped due to World War II material shortages and the company survived by selling coal. After the war in 1946, Roy’s son, Jack Marshall Upton, and Art’s son, Charles John Dillman, returned from active duty to become involved in the company. Roy died in 1946 of lung cancer at the age of 52.

The company was incorporated in the late 1950’s as Dillman & Upton, Inc. The business was owned and run by Arthur, Chuck, Jack and Edwin Forbush, who was a loyal and long-time employee. Many new products were added, and the company continued to grow throughout the 1950’s.

In 1963, James Terry Upton, the youngest child of Roy and Ruth came in to the business at age 27, after being in business with his father-in-law, Harold W. Milton. Having always been interested in the lumber trade, Terry had earned a bachelor’s degree in building construction from Michigan State University. Bringing new ideas & strategies, Terry saw the need to expand product lines.
Some of the partners were more open to change than others. Young Terry often did his best updating and renovating when the others were away on vacation. The “changing” Dillman & Upton grew rapidly, dropping the declining coal business about 1960. 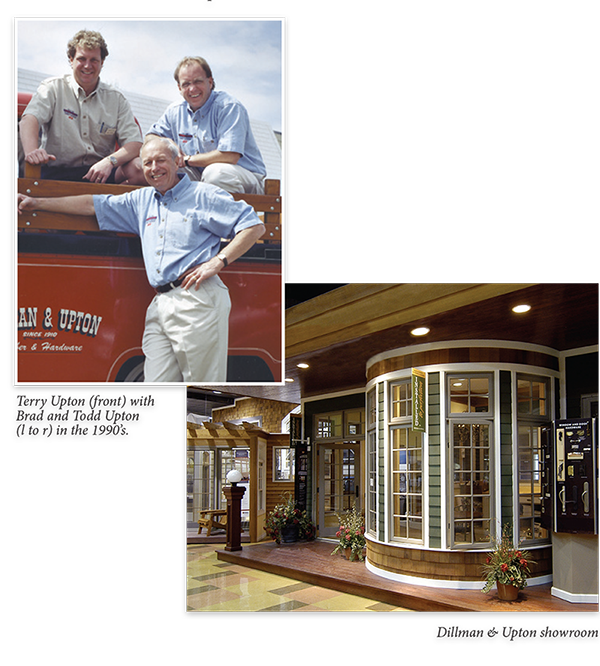 Chuck Dillman left the company in 1963 to work for Georgia Pacific Company, Beatty Lumber Company and Erb Lumber Company. Arthur Dillman died as Chairman of the Board in the late 1970’s followed by Board Chairman, Ed Forbush and Chuck Dillman in the 1980’s. Jack Upton & his wife, Katie, retired in 1979 and moved to Fort Meyers, Florida. Jack died in 1992.
During the 1970’s Terry and Beverly’s three sons, Mark Roy, Bradley William and Todd Milton, worked part-time as stock boys, counter help and hard laborers. All three boys attended college, with Brad and Todd returning to the business and Mark going into the building business with a national company in Phoenix, Arizona.

In 1987, Dillman & Upton moved to its present location at 607 Woodward. It had grown from a small company of four or five employees and a few hundred thousand dollars in sales to a corporation of 50 employees and sales of several million dollars. Its full-scale Home Center continues to serve both homeowner and builder. Product lines include lumber, hardware, cabinets, windows, decking, paint and a host of specialty items.
Dillman & Upton entered the new millennium with strong competition by the “Big Box” Home Centers. Expanding their focus from supplier to installer, the company evolved into a major provider of custom kitchens and quality windows. By providing full-service installation and in-house design specialists, Dillman & Upton became a single source for many new home and remodeling projects. They constantly updated the extensive displays in the showroom so that builders and homeowners could use it as a tool and an inspiration for their homes and businesses.

While continuing its attention to traditional, high-quality lumber and hardware, Dillman & Upton established a reputation for offering innovative products and creative solutions for the building industry.
Actively involved with the greater Rochester and Oakland County community, Dillman & Upton continues to be a good corporate citizen and employer, as well as an honest place to do business.

Dillman & Upton is presently owned by brothers Brad and Todd, fourth generation Uptons. While the Dillmans have not been involved for many years, no one wants to change a good business name! As of 2016, fifth generation Uptons include Sara (age 26) & Megan (age 22)…Brad & Sue’s girls and Ryan (age 14) & Emily (age 13)…Todd & Stacey’s children. As evidenced by history, the influx of family members is vital to an independent business.

Brad Upton notes, “The year 2009 will go down in our history and our state’s history as a challenging and unprecedented year. With General Motors and Chrysler going bankrupt, along with Stock Lumber and National Lumber, we are proud to have made it beyond 100 years. Thank you to our dedicated employees and loyal customers.”

Terry Upton reflects on the company’s growth and involvement. “Dillman & Upton has had the privilege of supplying something to most every construction project built or remodeled in the Rochester area during the last 106 years. We have known a multitude of local people from men during the Great Depression shoveling coal to pay off coal bills, to very wealthy people like Matilda Dodge Wilson & Alfred Wilson, when they were building Meadowbrook Hall. The whole nature of our industry and our area has changed dramatically over the years. The arrival of the “Big Box” stores certainly had an impact, but we think our personal and well-trained staff serves the public well. We look forward to the next 100 years.”

We offer every product needed to turn your home improvement dream into reality. 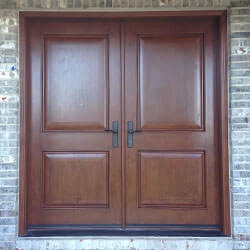 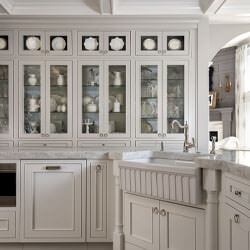 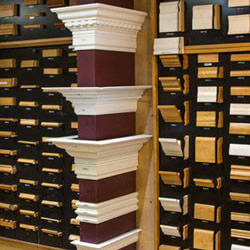 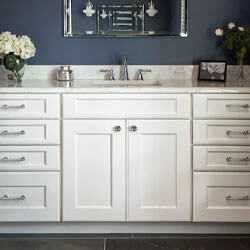 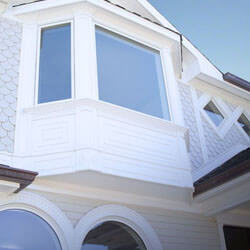 Healthcare Transparency and No Surprises Act

Let's Build Something Together

We are ready to work with you. Please get in touch today!